Gyz-Galasy – the Maiden Tower is the greatest and the most mysterious architectural monument of Baku. Neither the exact date of the construction of the tower, nor its exact purpose has become known so far.

The mosque was discovered in 1964 during the excavations near the Maiden Tower and dates back to the 10th century. The excavations were ceased to be continued only in 2000. At present the mosque is being restored.

Multani Caravanserai dates back to the 15th century. The name was derived from the locality in India from where merchants and pilgrims came to Baku. Restored in 1970s the caravanserai is used as a restaurant.

Bukhara Caravanserai dates back to the 14th century. Merchants from Middle East used to put up here, hence the name of the caravanserai. At present there is a restaurant here.

Trees grew in this area. In 1964 an arcade of a market was discovered while digging the foundation pit for a restaurant. The square closed the mosque of the 17th century, which was turned into a church by the Russians, and was pulled down in the Soviet period.
The fragments found during the excavations, as well as those belonging to the Sabail Castle and those lifted from the bottom of the sea are displayed in this square.

Haji Gayib’s Bathhouse or Haji Bathhouse was built on the boundaries of the 15th-17th centuries. At present the bathhouse is below the marks of the street in consequence of century-old piled up ground.

A small mosque – madrasa (a religious school) dates back to the 18th century. At present a curiosity shop is located here.

A small mosque – madrasa (a religious school) was built in 1301. At present a curiosity shop is located here.

A two-storey caravanserai was built in the 15th century and was given to a citizen of Baku - Gasim bay and his heir for use by Shirvanshah Khalilullah I. At present Mugham Theatre and a restaurant are located here.

Inside the mosque there is an inscription with a date of 1169 (the year 567 of Hijri) and with the name of the master’s - Ustad Ashur’s son - Ibrahim Bakuyi’s descriptive carving. The mosque got its name on the boundaries of 19th-20th centuries when the workers from Daghestan arrived in Baku to earn their living and the inhabitants presented this mosque to them for divine services.

11. The portal of a dwelling house

The Portal of a dwelling house dates back to the 17th-18th centuries.

Khan’s or Great Caravanserai dates back to the 15th century.

A small cell where a mosque –madrasa was located (a religious school) was constructed in 1645-47. At present there is a curiosity shop here. 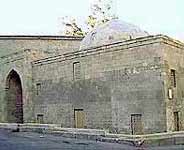 Seyid Yahya Murtuza’s Mosque dates back to the 17th century. In 1920s it was covered with occasional one-storey buildings on all sides. In 1980s during the reconstruction of the adjacent square the building was freed from the extensions being given its primal view.

Mahammad Ibn Abu-Bakr’s Mosque, known among people as Synyk-gala is a monument dating back to rather an earlier period in the old Baku fortress. There is an inscription on the wall of the mosque. “In the name of Allah Gracious and Merciful! The construction of the building of the mosque was ordered by Ustad, Superior Mahammad, son of Abu-Bakr in the years of 1078/79. 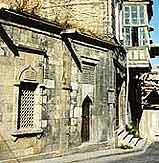 The rectangular mosque is covered with a stone vault of lancet contours. According to the epigraphic inscription on the façade, the mosque was constructed in 1415/16 (818 of Hijri) under “the Soltan, the son of Sheikh Ibrahim”. The mosque was built by the order of Haji Amir Shah Yagub. 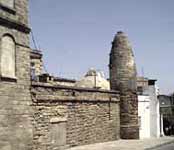 Aga Mikayil’s Bathhouse was constructed in the 19th century by a Shamakhy citizen Aga Mikayil. The chimney was built in the form of a rocket. The bath has been functioning ever since.

On the wall of the mosque there is an inscription: “Honoured sadr Amin ad-Din, son of Abu-Bakr ordered to restore this mosque to contemplate the divine image and to please Him. May God help him in his benevolent work. The date is 708 of Hijri (1308/09). The inscription informs about the restoration of the mosque, which was most likely constructed in the earlier period.

Epigraphic inscriptions on the façade of the Chinese Mosque indicate that it was constructed in 1375 (in the year 777 of Hijri) by the will of Fadlallah Imam Osman ibn Shirvan, therefore sometimes the mosque is named after him. The inscription on the wall also says that the mosque was restored in 1772/73 (1186 of Hijri) by Masud Ali. 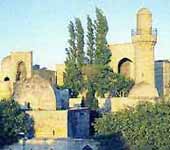 The construction of the Shirvan shahs’ residence was started in the 15th century under Shah Khalilullah I. The palace complex includes the palace itself, Divankhana, a burial vault, a mosque, a mausoleum and a bath-house.

Beylar Mosque was built in 1895 in the place of an old mosque. At present a restoration centre is located here.

The Mosque was constructed by Haji Bani, an architect in the 16th century. The epigraphic inscription says that the mosque was repaired in 1902/03. At the same time a vestibule part and the women’s half (shabistan) were added.

The mosque was erected by Haji Heibat Amirali oglu in 1791 (1206) and is located in an ordinary construction of living quarters. In one of the corners of the chapel were buried the architect and his wife.

A quadrangular tower was called Jabbakhana – an arsenal. It is situated at the north-western fortress wall and adjoins Ismailliya building. The tower was included in the system of the defence constructions of the fortress, defending the city on the north side. It dates back to the 14th century. It was last restored in 1950-60s.

Shamakhy Gates were the main gates of the fortress. They appeared in the 12th century. The gates situated to the left appeared next to the first ones in the 19th century when the second row of the walls were pulled down.

Molla Ahmad Mosque belongs to the block type of mosques and was constructed in 1300/01 (700 of Hijri). It was built by the order of Nasraddin Gushtasp ibn Hasan Hajibaba, its architect was Ustad Mahmud ibn Sad, the author of the well-known constructions including the castle in the settlement of Nardaran and the mosque with a minaret in the settlement of Bibi-Heibat (the end of the 13th century). 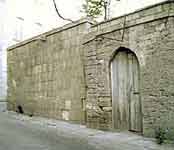 Mirza Ahmad’s Mosque dates back to 1347/48. From the inscription on the mosque: “the construction of this mosque was ordered by the star of the people and religion Movlana /our lord/ Ahmad son of the late Shams ad-Din Mahammad al-Hafiz ad-Damgani – Long live his dignity and fame! - in the year of 748 of the Hijri calendar.”

Khan’s House consisted of three buildings and was constructed in 1747. After the occupation of Baku khanate by the Russians in 1806, the house was looted and came to be used as a soldiers’ barrack. At present the only surviving parts of the Khan’s House are the entrance and the foundation. The excavations carried out there enable to suggest that this place was populated in the 9-10th centuries.

The underground passage within the fortress walls was discovered relatively recently.

Gasim Bay’s Bathhouse or Shirin-hamam dates back to the 17th century. The water supply, the heating system of the bathhouse were carried out through ceramic pipes set inside the walls and beneath the floor. The bathhouse was restored in the 1970s and adjusted to a Green Drugstore.